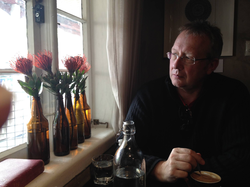 Apart from writing and education as my careers, I've enjoyed sport, travel, good food and coffee. I currently manage an IT department - a complete shift in my employment history. I played and coached beach and indoor volleyball and basketball at State League/District levels, dabbled in football, athletics, netball, spent 8 years as an actor in amateur theatre, and was a regular voice on ABC radio segments for about a year with Matt and Dave and Peter Goers. I love coffee shops, computer games, animals and good movies. Yes, I even read occasionally.

The picture to the left was taken by my sister-in law, Anne Stropin of Chesser Studios, in 2002. Since then, age has made photos less flattering.

Born March 28, 1955, at the Tailem Bend hospital, the only child of William Henry Shillitoe and Eileen Frances Shillitoe, I spent my first 16 years on a small farm between Tailem Bend and Meningie in South Australia. Like many country kids, I learned to ride horses and motorbikes, trap and shoot rabbits, shear sheep, work hard, and appreciate the beauty and vagaries of the Australian bush.

I attended Coomandook Area School from Year 1 to Year 11, winning a variety of academic prizes, including a Commonwealth Scholarship in Year 10. I was dux of the school in my final year and MVP for the local football club U17s. I completed secondary schooling at Mitchell Park Boys Technical High School in Adelaide where I was offered a Teaching Scholarship to study at Flinders University or a second Commonwealth Scholarship to continue tertiary study. I chose the teaching scholarship because it offered a little more supportive income. Mercenary.

From 1973-1977, I completed a Bachelor of Arts, majoring in English, Philosophy and History, an Honours degree in English and a Diploma of Education. I supported the cost of study and living away from home with a variety of part-time and sometimes full-time jobs, including working as a rouse-about, a milk delivery boy, a Barley Board officer, a storeman, a fibreglass fixer and sprayer, a concrete truck cleaner, and a driveway and lube-bay attendant.

I began teaching in 1978 at Stuart High School, Whyalla. I completed a Bachelor of Education, majoring in Curriculum and Educational Psychology through distance education in 1982. My teaching career has spanned several schools - Stuart High, Whyalla (1978-1984): Aberfoyle Park High School, Adelaide (1985-1994): Hallett Cove R-12, Adelaide (1995-1999); a brief time at Jerudong International School, Brunei (1997); Concordia College, Adelaide (2000-present). I've also held a variety of leadership roles, and have worked casually and part-time for the International Baccalaurete Organisation, Flinders University, and Adelaide TAFE. I started and eventually dropped a PhD in Creative Writing between 2002-8 because of the conflict between my working life, a writing project (Dreaming in Amber), and the part-time study.

My first ever published piece was a poem in Year 3 at primary school, which inspired me to get writing published in school magazines thereafter, and kindled in me the desire to one day publish a book. I finally had a poem professionally published in 1977 in the anthology Neon Signs for the Mute, a BHP/FAW initiative for young Australian writers. However, I quickly tired of trying to get poetry accepted in literary magazines, and then teaching consumed my energy. I literally pencilled almost 40,000 words of a  fledgling teenage novel between 1980-1983, but gave up because it was too time-consuming in an already busy life.

In 1989, I began drafting a fantasy novel, inspired in part by my regular design and delivery of Dungeons and Dragons roleplay games with various groups of friends, between 1978-1984. A chance suggestion by a Pan Macmillan book distributor, Grahame Phillips, that I submit my concept and sample chapters to Roxarne Burns, then editor at Pan Macmillan, led to a contract offer for a three book fantasy series in 1990. Guardians, the first of the Andrakis trilogy, was released in 1992. Kingmaker followed in the same year, and Dragonlords was released in 1993. The series was moderately successful, even getting to #1 one week on the Myer lists, and appearing in the top ten in other sales lists, and was among the first genuine older reader Australian fantasy series published.

I took a half year of leave from teaching to write in 1993 and generated two novel drafts. One novel, The Last Wizard, was published by Pan Macmillan in 1995, and this novel was shortlisted for Best Fantasy Novel in the inaugural Aurealis Awards that year.

From 1996-1998, I published several short stories in various magazines and anthologies, while I was simultaneously working on three other writing projects.

In 1999, the second draft novel from 1993 emerged through Wakefield Press as the then controversial teenage novel Joy Ride. The novel, though not popular with adult readers, was well-received by teenage readers, and I was invited to be a guest writer and speaker at the 2000 Writers Festival in Adelaide where teenage angst fiction was a topic.

HarperCollins Voyager published my next fantasy series, the Ashuak Chronicles, in 2002-3: Blood, Passion, and Freedom. Like The Last Wizard earlier, Blood was shortlisted for Fantasy Novel of the Year in the 2003 Aurealis Awards.

In 2003, HarperCollins Angus and Roberston published my third teenage novel, Caught in the Headlights, which received critical acclaim and was shortlisted in the Children's Book Council of Australia's Notable Books for Older Readers award. The novel also appeared on several Premier's Reading Lists around Australia.

Altair Australia Books picked up the rights to the out-of-print Andrakis series in 2005 and I re-wrote sections of the original novels before they were re-released as POD (print-on-demand) novels in 2006 with new titles: The Waking Dragon, Maker of Kings and The Dragonlord War. In the same year, Altair Australia also released an anthology of my stories, Tales of the Dragon.

A new fantasy series emerged in 2006 with the release of The Amber Legacy by HarperCollins Voyager. It was the first in the four book series, Dreaming in Amber, and was followed by A Solitary Journey (2006), Prisoner of Fate (2007) and The Demon Horsemen (2008). This series brought together a collection of fantasy novels, that began with Guardians in 1992, into one long saga about the dragonlords and the amber magic. So, essentially, the Andrakis trilogy, the Ashuak Chronicles and the Dreaming in Amber quartet combine to complete a fantasy world history and story. In 2011, HarperCollins moved the Dreaming in Amber quatrology to Kobo e-books.

From 2010-2015, I worked on several fledging novel projects, in different genre, and published a couple of short stories.

At the beginning of 2015, I began experimenting with ePub self-publishing through Amazon Kindle Direct by re-publishing several out of print books on my backlist, beginning with the Andrakis trilogy as three separate books - The Waking Dragon, Maker of Kings and Dragonlord Wars - and as an omnibus edition with all three books combined, as Andrakis. I also re-published the story anthology Tales of the Dragon.